Are you looking for an As The World Caves In piano tutorial?

If you’re one of the 57 million who viewed the viral Sarah Cothran cover or a die-hard Matt Maltese fan, then you’re in for a treat.

In this piano lesson, you’ll learn how to play As The World Caves In and learn a bunch of cool piano hacks.

You can use these techniques to learn other songs as well.

How Matt Maltese Plays As The World Caves In

Start by listening to Matt Maltese playing and singing the tune:

Next, we’re going to talk about some tips and tricks to figure out how you can play the song for yourself.

At its most basic, you need to learn how to play 3 kinds of chords, major, minor, minor 7b5, and dominant chords.

Learn how to play these three kinds of chords, and you’re pretty much on your way to learning the entire song.

If you need more details how to play these kinds of chords, here is a great place to learn chord theory.

Now let’s move on to the second step.

Why You Need To Learn Chord Progressions For This Song

The reason for that is simple: If you already know how to play chord progressions, then it becomes even easier for you to learn this song.

You see, the key to going through any piano lesson fast (such as this As The World Caves In Piano Tutorial) is understanding and playing common patterns.

Almost every song ever put out into the world follows common patterns.

If you understand these patterns (such as a chord progression), you’ll be able to figure out hundreds of other songs easy.

As The World Caves In is in 4/4 time, and so for our chart you’ll have 4 beats for every bar.

The chord progression for As The World Caves In is as follows:

Now you might wonder, what are all these roman numerals written above?

In the key that Matt Maltese plays it in (Bb), here are the chords:

Now that you have all of the chords, let’s dig deeper.

How To Use A Simple Yet Effective Comping Pattern

To start digging deep into this As The World Caves I Piano, you can use a simple comping pattern.

For the right hand, just play the chords in quarter notes.

Use a dotted quarter – eighth note rhythm for the bass. You can use single notes or octaves at the lower register:

Let’s start with the chords of the verse:

Once you’ve gotten a hang of this comping pattern, let’s spice it up a bit more.

Whenever Matt Maltese plays the verses, he takes in an idea similar to John Lennon’s “Imagine”.

This is a little chromatic line that looks like this: 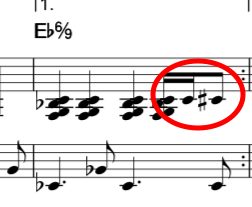 This chromatic line works as a response to lines sang.

Like Matt Maltese, you use it after singing a line of the song.

It’s important to use it as kind of a walkup to the tonic chord i.e. the I chord of the song.

Now let’s look at the prechorus where you’re going to learn how to play a minor line cliche.

Matt Maltese creates tension in the song by using a minor line cliche in the prechorus that looks like this:

The minor line cliche actually starts at the Gm chord above.

A fast way to get started learning how to play minor line cliches is as follows:

Learn how how to play minor line cliches in all 12 keys to master the technique.

Now let’s take a look at how to play an ending for As The World Caves In.

How This As The World Caves In Piano Tutorial Ends

In the final moments of the song, Matt Maltese ends the song elegantly in a manner similar to this:

To play the ending, here are the steps:

By completing this ending (along with the other techniques discussed), you can now play As The World Caves In.

I hope that you find this As The World Caves In piano tutorial helpful.

Feel free to leave a note below if you have any questions, comments, or suggestions for the next lesson.