If you’re looking for some sad piano chord progressions, this is the lesson for you.

In this tutorial, you’ll learn how to move people to tears with some sad, bittersweet piano playing.

How To Extract Sad Piano Chord Progressions From A Jewel Hit

One of Jewel’s hits from the 90s is “Foolish Games”. It’s a really sad sounding song from the 90s.

The song has such emotional power that it’s worth exploring how Jewel thought of the chord progressions.

Listen to the song here first:

1. How Jewel Moves You To Tears With Sad Piano Chord Progressions

The song opens up with a really sad, melancholic piano passage with these chords:

For our first sad piano chord progression we have the vi – IV – I – V.

This is a variation of the famous I – V – vi – IV chord progression except that the focus is on the minor chord. It can also be called a i – VI – III – bvii chord progression if we consider it to be in a minor key.

However, it’s more convenient in this case to think about “Foolish Games” in the key of Gb rather than Eb minor.

Let’s look at how you can create an emotionally charged prechorus below.

2. How To Add More Tension

Next among our sad piano chord progressions goes like this:

In roman numerals, we have this ii – IV – I – V chord progression.

Jewel uses this chord progression to ramp up the tension leading to the chorus.

We’re going to explore that next.

3. How To Play A Strong, Driving Buildup From Minor Chord Melancholy To Major Tonality

A chord progression based on major chords, at first, doesn’t seem to fit something that should sound sad.

After all, major chords sound quite happy.

But, given song context, it works wonders providing some emotional catharsis.

Let’s look at the chords for the chorus of “Foolish Games”.

For this one, you will play the following chords:

With a bit of some expressive melodic and rhythmic techniques along with compelling arrangement, these major chords can sound sad.

Led Zeppelin’s “Stairway to Heaven” has so much impact that to skip it in this lesson is injustice.

Here’s the chord progression of the opening section:

The most interesting part of a line cliche is how it has that descending chromatic bass line going.

This is the actual minor line cliche in the song:

This chromatic baseline makes connecting one chord to the next smooth:

This minor line cliche is merged with a backdoor chord progression:

And so the complete opening section has this:

How To Create A Contrasting Section

The B section of Stairway to Heaven goes like this:

This allows you to take a break from the minor line cliche.

Let’s try and learn the climax of Stairway to Heaven.

The guitar solo part and last verse of Stairway to Heaven has this chord progression:

In this live version of Stairway to Heaven, you can hear John Paul Jones clearly play the chord sequence using an electric piano.

A variation descending chord progression is also used in the classic Red Hot Chili Peppers hit “Under The Bridge”:

Let’s take a look at other ways of creating sad chord progressions.

The Sophisticated Way To Drive People To Melancholy

Former Dream Theater keyboardist Kevin Moore has been praised by fans and fellow bandmates for being an awesome composer.

The biggest evidence of this stems from his swan song at the end of his run with Dream Theater. It’s called Space Dyed Vest.

The song is so hauntingly beautiful that it deserves to be examined.

Let’s look at the opening section of the song: 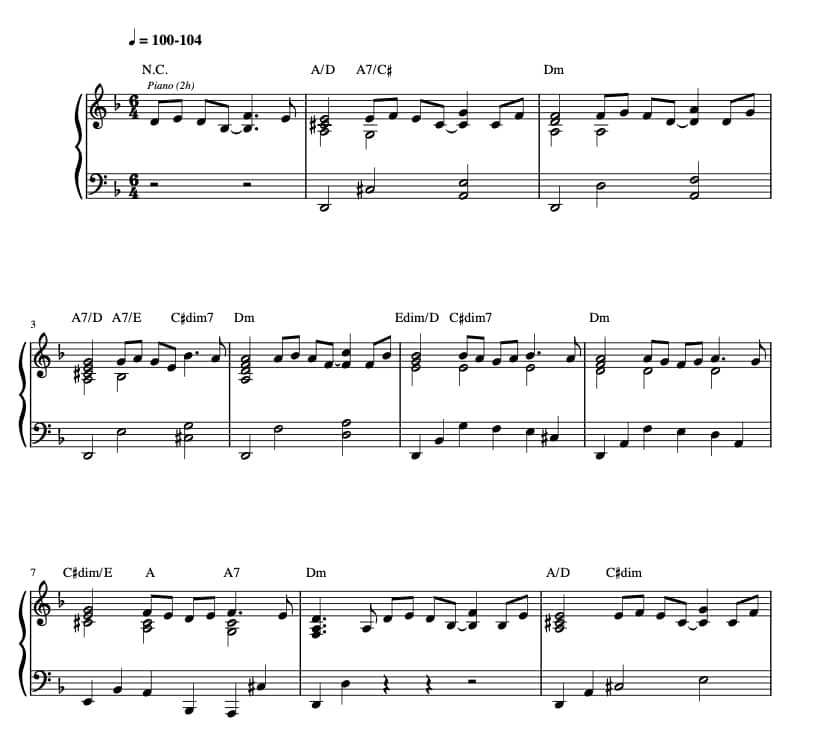 If you carefully inspect the song, there’s are only two chords.

It doesn’t seem apparent, but it is the case. Let me show you:

Dm is obvious in the piece as the tonic chord. As far as A7(b9) is concerned, we can find it in different spots albeit deconstructed.

At any point where you find A, A7, C#dim, and Edim in the song, those all come from A7(b9) and all of them function as the dominant chord. This dominant chord always resolves to the tonic in this song.

These all work together with the interesting melodic lines and counterpoint that Kevin Moore crafted in the song itself.

The most essential chord progression in jazz is the 2-5-1.

Guess what: the minor sounding equivalent is a really sad and melancholic sounding sequence.

We find this chord progression in the opening bars of Victor Young’s “Stella by Starlight”:

Now let’s look at some tips to learn how to apply sad piano chord progressions in your music.

4 Tips How To Learn These Sad Piano Chord Progressions

Here are 3 of the best ways to master using these chords in your music:

I hope that you enjoyed learning about sad piano chord progressions.

Do you have comments, questions, or suggestions for the next lesson. Leave a note for us below.

Happy practicing. Check out this R&B Piano Chords Tutorial next!