Would you like to master how to play minor key piano music?

You’ve come to the right place.

In this lesson, you’re going to gain solid foundation for playing piano in minor keys.

This is because major scales serve as reference points for everything we talk about in music.

You’ll learn minor key piano music when you contrast it with major scales.

Why Mastering Minor Key Piano Music Starts With The Scales

Scales are fundamentally a sequence of notes used for creating musical elements such as melody and rhythm.

A scale starts with a note called a root and ends just before playing the same note a register higher.

The minor scale is derived from the major scale.

For instance, we can pick up an A minor scale from a C major scale.

We simply start the same C major scale on A rather than C to get an A minor scale i.e. A-B-C-D-E-F-G.

While we still have all the same notes, the mere fact that we start on and emphasize A gives us a different sounding scale.

Since A minor and C have the same set of notes, both scales are relative to each other. We can then say that A minor is the relative minor scale of C major.

While the natural minor scale has a nice sound and all, it doesn’t really work well all the time.

You’ll see this when we look at chord progressions we form from the minor scale.

Why You Need Another Kind Of Minor Scale

From a natural A minor scale, we can have a very basic 1-5 chord progression.

The 1-5 chord progression in the A natural minor scale is simply Am-Em.

In major keys, the 5 chord is a dominant 7th chord. It has a major triad built into it.

However, in minor keys, the 5 chord is also a minor chord. Now, while it sounds okay, it doesn’t sound very convincing or powerful at all.

What you want is a chord that resolves really nice into the 1 minor chord.

To make this possible, composers from centuries of old developed the harmonic minor scale.

If you take a closer look, the E7 chord occurs naturally in the A harmonic minor scale.

Take a look at the A harmonic minor scale. You’ll see each of the notes of E7 existing naturally in it:

Now let’s take a look at some common chord progressions that use this concept.

Obviously, the key to playing minor key piano music is having the ability to play minor key chord progressions.

Let’s look at some of the most common:

One of the most famous examples of this can be seen and heard in Bagatelle in A minor a.k.a. “Fur Elise” by Ludwig Van Beethoven:

As you can see and hear, the piece simply goes Am-E7-Am over the first 4 bars.

Another example is Johann Sebastian Bach’s Sonata in G minor BWV 1020 that goes Gm – D7 for the 1st 2 bars:

You can also see the use of the harmonic minor scale to build the melody.

For instance, J.S. Bach’s Toccata and Fugue in D minor, has this exact idea going. Check it out below: 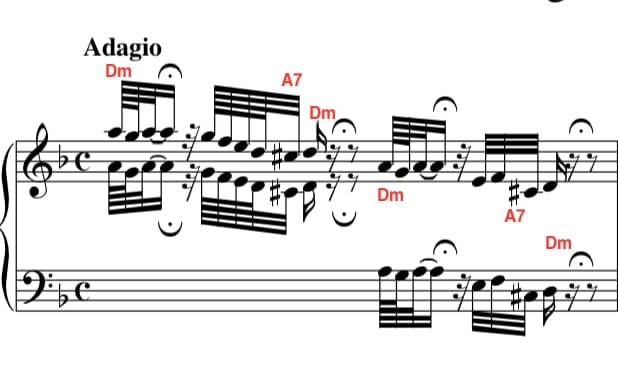 In both examples, the harmonic minor scale is used to come up with those chords.

If you’ve heard the song, “Wonderwall”, by Oasis, you certainly have heard of this minor key chord progression.

Here’s a simple “sing-along” arrangement of the chords for piano:

Another tune that uses the minor 1-6-3-7 chord progression is “Little Do You Know” as popularized by Alex & Sierra.

It’s a variation of the 1 – 5 – 6 – 4, probably the most famous chord progression in pop music for so many decades.

In jazz, the ii(b5)-V-i is the essential minor chord progression.

Here’s what it looks like in the key of Am:

Since we’re now talking about jazz, a great example of where it’s used is Autumn Leaves.

In fact, almost 99% of jazz tunes in a minor key use this chord progression

Interestingly, learning how to play Autumn Leaves in all 12 keys helps you build the skills to deal with both major and minor 2-5-1 chord progressions.

Learn this chord progression in all 12 keys.

Lastly, one of most famous minor key chord progressions is the minor line cliche.

Some of the best examples include Led Zeppelin’s “Stairway To Heaven” and the jazz standard “My Funny Valentine.

Here’s an example of a minor line cliche like you would find in “Stairway to Heaven”:

Practice playing this minor line cliche in all 12 keys to get it under your fingers.

Going forward, let’s talk about the melodic side of minor key piano music.

7 Kinds Of Minor Scales You Need To Learn

Since music has been played, minor scales have been thought of as serious, sad, somber, dark, or deep.

A lot of it has to do with the sets of notes used for melodies. Let’s talk about some of those.

Another interesting scale that adds an exotic flavor to music is the Phrygian scale:

The Phrygian scale can be used to add a kind of flamenco-like or Spanish sounding flavor to your solos.

Lastly, another important minor scale used in music nowadays is the Dorian scale:

Learn these scales in all 12 keys and use them to improvise music.

Here are some key practice tips:

I hope that you enjoyed this lesson on minor key piano music.

If you have questions, comments, or suggestions for the next lesson, feel free to leave a note below.