Looking for a great Canon in D piano tutorial?

You’ve come to the right place.

In this lesson, you are going to learn how to play an easy arrangement of Canon in D by Johann Pachelbel.

By learning Pachelbel’s Canon, you will learn a very influential piece of music. This canon’s influence extends to modern popular music to this day.

it also remains a top staple of ceremonial music.

Moreover, you can also use the tips and tricks here to learn other songs faster.

Before you begin learning, here’s a demonstration of my arrangement of Johann Pachelbel’s Canon In D:

This demonstration will serve as the basis for this entire tutorial.

After listening to the demonstration, I will show you the moves below.

The first thing you need to learn in this Canon in D piano tutorial is the chord progression.

Once you master this chord progression, you have already completed a big portion of the piece.

This is because almost every idea in the piece is based on this chord progression.

Get started by learning these chords:

By playing this progression using the exact chord voicings written above, you have just learned the first theme.

Once you get the hang of it, we can move to the next step.

How To Play Left-Hand Stride Piano

Here’s how we play some left-hand stride chords for Canon in D:

Stride piano technique is a very useful comping method you can use for various tunes.

It creates a kind of “oom-pah” feel, fills out harmonies, and a fatter sound.

Let’s look at another method for left hand comping.

In this particular arrangement, I used a root-5th-10th pattern to arpeggiate the basic triads.

Practice it for every chord of Canon in D:

The left hand arpeggios are very important to master.

Consequently, you will consistently play them all throughout this arrangement until the end.

Once you have accomplished this step, let’s move to the next part of this Canon in D piano tutorial.

How To Play The Second Theme

Here is the second theme of Pachelbel in D:

One of the fast ways to learn how to play this theme is to recognize some shapes. 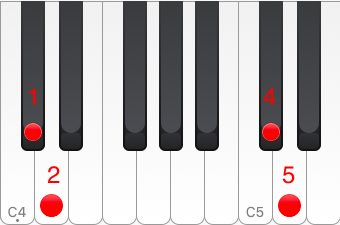 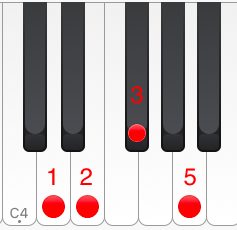 Once you have learned these shapes, it’s all a matter of arpeggiating them to play the melody.

It’s very important that you follow the indicated fingerings to play this theme successfully.

Once both right and left hand parts have been mastered, all you have to do now is put them together as shown above.

For the next part of this Canon in D piano tutorial, let’s get fancier.

The Canon In D Piano Tutorial On Runs

Interestingly, this Canon In D run is one of the most thrilling portions of this piece.

As a matter of fact, this particular run is useful for developing ways to move melodically to and from chords.

The technique used in this run will help you learn how to solo over chord changes as well.

Here’s a transcription of this run:

Now let’s move to the next theme.

How To Make Things Just A Little Bit Spicy

For the next part of this Canon in D tutorial, take note how it appears to go out slightly into a different key:

The first portion of this theme involves a melody with harmonies underneath. On bar 25, I start by playing a 2nd inversion D chord.

When I move to the A chord, I hold A and C# as a half note while playing that stepwise melody on top going F#, G, F#, E.

On bar 26, I start the melody with a 2nd inversion Bm chord and then followed by a melody in 3rds.

With the exception of the 1st inversion D chord on bar 27, play the melody as 3rds (as you can see in the sheet music and demo).

Did you notice that C natural? While it does feel sort of out of place, this kind of tension allows you to transition well from G to A7.

The next move involves playing the last theme with harmonies on top . Again, make use of various chord inversions to achieve this effect.

Check out this next passage:

More than just being able to play the piece, you have just learned some moves that you can use in other tunes.

What sort of moves you may ask? Check it out below:

Since you have learned all the moves in Canon In D, let’s see how we can apply those to any song.

Let’s start with how we treat the chords.

One of the most important moves we’ve learned are left hand arpeggios.

Interestingly, the formula we used is root-5th-10th. If you use the same formula over any chord, you can create a simple yet effective accompaniment or bass line.

Here are great ways to train yourself to do this move:

Another comping technique we featured was a basic stride piano technique:

You can practice as written above in all 12 keys. Additionally, practice a root-chord-5th-chord version of the stride technique.

Another trick you learn from this arrangement is creating harmonies by simply using chord inversions.

About 99% of great melodies make use of chord tones.

Therefore, if you understand what are chord tones, you can easily harmonize them with chord inversions.

Interestingly, you can see this happen all the time in this Canon in D piano tutorial.

And so if you know that F# belongs to D major, all you have to do is play D and A underneath it to effectively harmonize it.

Guess what: By doing so, you have just played a 2nd inversion D major chord.

Practice your chord inversions as block chords first and then as arpeggios.

Start working on this using triads. Here’s an example of a D major chord in its root position and inversions:

Once you are able to do this, work on all the 4 basic triads (major, minor, augmented, diminished) first.

After that, work on 7th chords, chords with extensions, and various chord voicings.

This will help you master how to harmonize melodies.

I hope you enjoyed this Canon in D piano tutorial.

Work on the concepts of this arrangement one concept at a time and start applying them to other tunes.

Once you are able to transpose the techniques in all 12 keys, you’ll effectively skyrocket your ability to learn various piano pieces.

If you have any questions, comments, or suggestions for the next lesson, feel free to leave a note below.